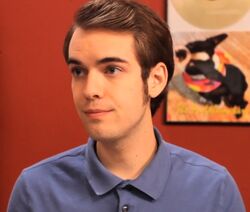 Portrayed by
Jack Douglass
First seen
"It Begins Again"
Last seen
None
Appeared in
{{{Appearances}}}
First mentioned
{{{Mentioned}}}
Episode count
34
Name
Melvin Munson
Also known as
Intern 2
employee 41512
Flowchart
Profession
Intern (MyMusic)Vice President (Acid Factory)
Family members
Unknown father
Melvin's mom
Aunt Beverly (mother's side)
Scene (girlfriend)
Season(s)
1-present
Flowchart (formerly known as Intern 2) is the second intern to be hired to work at MyMusic. He usually doesn't express much emotion such as most characters at the show, and his character has a lot of undecided thoughts. He often works for Indie (i.e. massaging him, doing various chores for him), but yet Indie still hates him, claiming that he smells and is a moron. He along with Scene, who is his girlfriend, are considered 'slave labor' according to Indie.

When MyMusic reopened based on a Youtube channel, Intern 2, the second intern hired (as indicated) was given a job by Indie to help out with the company along with Scene. In It Begins Again, however he is more like Indie's personal slave, or what he describes as "the whipping post of an angry hipster." When he arrived at the company he hadn't found a specific music type to call his own, and he claims he likes all music genres, hence being known as only Intern 2. But despite the constant yelling from his boss, Intern 2 finds his job somewhat enjoyable, indicating he could've been the company's rat protector. When Metal was hired at MyMusic, he and Scene were appointed his production team for a new live show hosted by her, which he is generally unenthusiastic about. Intern 2 later on learned about Hip Hop's secret that he is a poser and is actually a nerd and became his therapist in a way. However, when Indie came around, Hip Hop was forced to physically hurt Intern 2 and act like his gangster-esque self; afterwards sadly apologizing.

Later, at the company's celebrations over the profit from the Jolt music video, he makes a stand about the video's obviously dangerous content. Hip Hop supports him when everybody starts bullying him again.

At the company picnic, he and Scene are the only ones who aren't fired for being posers because they're 'slave labor' status.

He is still being treated badly by Indie and is unwittingly insulted when Idol says that,"All who work for free are idiots". Intern 2 works for free, because he's an intern. In Someone Quits, Intern 2 reveals that when he completes school (which is soon) and has to leave MyMusic, he's going to work at the Acid Factory making flowcharts. After arriving at the Acid Factory, he is promoted several times for his hard work and flow charts. So much so that he gets the nickname "Flowchart" from his new boss, Reggie. In the season 2 finale, he comforts Scene and kisses her; she reciprocates and the two 'make out'.

Retrieved from "https://mymusic.fandom.com/wiki/Flowchart?oldid=7648"
Community content is available under CC-BY-SA unless otherwise noted.